Following the successes of its Shop and Share initiative, the TDC Business Centre and City Drug Store (Nevis) Limited have launched its school-based outreach programme.

Customers and clients can now purchase of a wide variety of school essentials (exercise books, backpacks, paper, crayons, scissors, pencils, pens, glue, markers, folders, erasers, as well as, arts and crafts supplies, etc.) and place them in specially constructed Yellow School Buses that are conveniently parked at the Point of Sale counters in the stores.

In exchange for their contribution, they will receive a ten percent (10) shoppers’ coupon towards their next purchase as a token of appreciation to the worthwhile cause.

At the end of each month until September, the educational materials will be sorted by staff and distributed to several children across the Federation based on their need with the aim of helping them to achieve success in the classroom.

Shop and Share started in 2015 and forms part of the annual Back to School promotional drive. It complements the TDC Group’s Corporate Social Responsibility activities which are specifically geared towards encouraging academic excellence.

The sales and promotional activity which ran from 1st thru 31st March 2019, was open to all patrons who bought products or services at a minimum of fifty dollars (EC$50.00) or more to qualify for a chance to vote for their favourite secondary school on St. Kitts and primary school on Nevis.

After making their respective purchases, customers were given a ballot at the Point of Sale Counters to cast their vote for their learning institution of choice and deposit their entries in specially marked boxes at the retail stores.

At the end of the thirty-day campaign, the two schools received the most votes from among over fifty ballots cast, after which the schools were notified of their good fortune.

The managers then made arrangements to visit the schools recently and presented the start of the art equipment valued three thousand one hundred and seventy-five dollars (EC$3175) during the morning assembly sessions, in the presence of the students, teachers and auxiliary staff.

The contest was first held in 2017 and forms part of the TDC Group’s ongoing customer engagement programme that is designed to further interact and share experiences, while fostering brand growth and building loyalty. 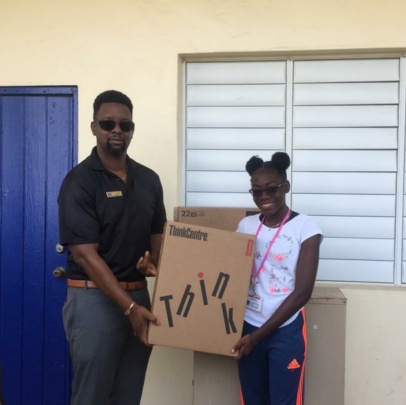 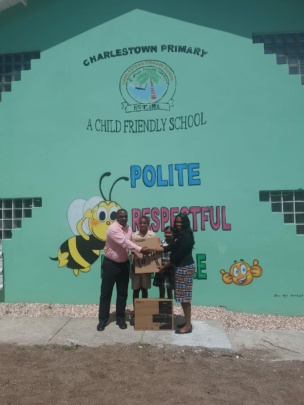